skip to main | skip to sidebar

I had fun looking at all the projects people are in the middle of last week, so I decided this may become a weekly thing for me. 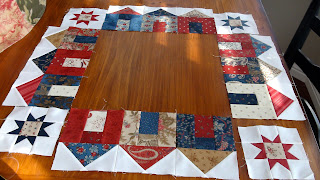 I decided that I would like to try and participate this year in the Another Year of Schnibbles.  I've been collecting these patterns since they first came out, yet I've never made one.  So I decided this is the year.  For the month of January they picked Full House as the pattern.  I love this pattern.  The blocks go together so quick and easy.
I decided instead of making the one of the pattern, I would try making this one, seen on Miss Rosie's blog
So today I laid it out to take a picture, finally realizing that my star blocks and my house blocks are not the same size.....I went back and reread the pattern found here called Around the Neighborhood.  It looked like I did everything right, so I looked at the picture again - I had to be off somewhere.  Low and behold you are also suppose to use the Tiny Town pattern to make your houses smaller for this project....I missed that step. So my houses are the same size as the Full House pattern....how to make it work?  I'll figure something out as I just have the checkered board and border to do now....my goal is to have it done, and quilted before the end of the month so I can submit it for the schnibbles parade!

Lets hope I get some sewing time this week!
Posted by Abby at 4:08 AM

It's adorable!! Love the little houses.

I've been eyeing the little houses quilt for some time now. Love it ours :) How about just adding an extra white frame around the stars?

I should get in on this Schnibbles thing. I have a lot of these patterns too. Love the fabrics you chose.

Love the little houses. And I hate when I skip a critical step like that. I like Cille's suggestion of a border around the stars.

So cute. I'm a sucker for little houses and I really like the colors you've chosen--nice contrasts going on there. I'd also be in the camp to put a sashing around the star blocks--it you do, you've just added your own design twist! (Always a good thing.)

Abby
Mother to two boys, wife, quilter, sewer, fabricaholic, lover of caffine - both coke and red bull - to keep me awake for my late night sew ins. Please join me for a look at what I love most. Family, fabric, sewing, quilting, and a little food thrown in!